After the public-private joint management in 1956, Anyang Forging Press workers' enthusiasm for work rose unprecedentedly. In response to the call of the Party for the development of iron and steel, all the workers worked together, the first C41-150 pneumatic hammer in our factory was manufactured and purchased in March,1959 finally after nearly three-year painstaking research. Since then, Anyang Forging Press has started a new journey of the development of forging hammer equipment. In the following year, 75KG, 250KG and 400KG pneumatic forging hammers have been successfully manufactured，filling in the blank of forging and pressing equipment in Henan Province. As the pneumatic forging hammers of the company have complete specifications, good quality, durability, good market feedback and high market share, it became one of the fixed-point enterprises in the forging equipment industry of the Ministry of Machinery Industry in 1965. After 1970, C41-560KG ,C41-750KG pneumatic hammer, 630KG pneumatic die forging hammer were successfully manufactured.
After years of continuous design improvement, the performance of pneumatic forging hammers produced by our company are becoming more and more perfect. On September 13th, 1983, C41-150KG pneumatic forging hammer of our company won the National Silver Award with an annual output of more than 300 units , and was exported to more than 40 countries and regions by relevant ministries and commissions of the State.

After the transition from planned economy to market economy, Anyang Forging Press has a keen sense of market demand, and extended the model of pneumatic hammer to both ends further. Up to now, it has developed into the most complete pneumatic hammer specifications from 9KG to 2000KG, and constantly innovate large-scale open die forging machine and close die forging machine. The hydraulic power head developed in the 1990s replaced the original steam power head, improving energy efficiency greatly and reducing pollutant emissions, which was rated as transforming forging hammer, saving energy, and protecting environment benefit the nation and people and render great service to mankind by He Guangyuan, former Minister of Machinery Industry Ministry. The Hydraulic Hammer models of Anyang Forging Press are the most complete from 1 ton to 18 tons. In addition, forging manipulator, hydraulic free forging press, electric screw press, steel ball skew rolling mill and other products have also been developed. With the development of requirements for Made in China 2025 and Industry 4.0, the company has developed a fully automatic die forging production line with the core equipment CNC die forging hammer , which also fills the gap in this field. 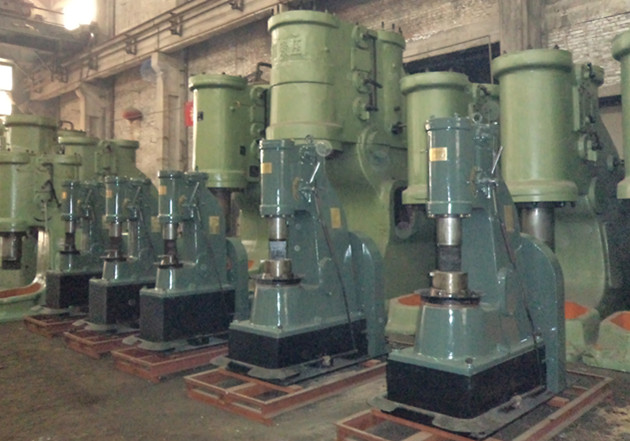