The first item of the meeting was addressed by the chairman of the company Liu Wei.

In order to achieve the 5-year strategic goal of Anyang Forging Press and gradually turn the blueprint into reality, Chairman Liu finally made a full-year plan for 2021, and hopes that all Anyang Forging Press employees will continue to uphold the spirit of indomitable strugglers and fully implement the established measures; We must desperately catch up with the trend of changes of the times, keep pace with the times, with more inspiring spirit, higher enthusiasm, more tenacious perseverance, more pragmatic style, innovation and leadership, "wisdom" wins the future! Strive hard for an even better tomorrow!

For the second item of the meeting, Li Yunming, deputy secretary of the party committee, reported on the summary of the development process of Anyang Forging Press in 2020.

First of all, Secretary Li led the delegates to recall that the company under the leadership of the party secretary and chairman Liu Wei, accurately implemented policies and acted quickly, and launched a vigorous anti-epidemic battle, leading the majority of party members and key employees to fight hard. The anti-epidemic process in the front line of preventing the epidemic and resuming work and production.

Secondly, Secretary Li recalled that with the full liberalization of the resumption of work and production across the country, Anyang Forging Press was fully engaged in intense and orderly production and operation. The company has formulated a production level response policy for the production workshop. The nine-hour work system and non-breaking overtime work on weekends to catch up on production are taking back precious time lost during the epidemic. In order to comprehensively promote the implementation of various business goals in 2020, Anyang Forging Press held a number of measures such as "Operation Performance System Driven Strategy Implementation Meeting and Regional Manager Appointment Meeting", "ERP Project Launch Meeting", and "Struggle Alliance Activities" .

For the third item of the meeting, Vice Chairman Chen announced the commendation decision.

President Chen announced the company's decision to commend the company's advanced collectives and individuals in 2020. President Chen expressed his hope that the commended advanced units and individuals will further play their leading and leading role and continue to achieve greater results. At the same time, we call on everyone to learn from the advanced, take the advanced as an example, work hard, forge ahead, and make new contributions to the realization of the corporate strategic planning goals. 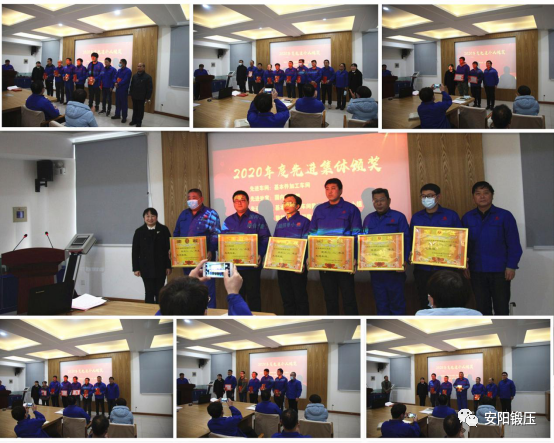