Forging is a characteristic material shaping process where material forming takes place by hammering the material into a characteristic shape. Traditionally, all forging processes are manual or powered by hammering using mechanical or screw presses but with the advent of high-tonnage hydraulic presses, the hammering effect has widely been replaced with pressing or squeezing of the red-hot material. While this increases the risk associated with the process itself due to the use of extremely high tonnage, it makes the overall forging process more economical. This is because the force in the pressure driven hydraulic presses is not affected by the material or the amount of gravitational force acting upon it. In fact, the tonnage in a hydraulic press is a direct result of the mechanism where the hydraulic fluid properties and amount can be changed to alter the applied pressure. This also reduces the size and power requirements of the driving mechanism which is used to lift the hammer after each cycle making hydraulic presses more economical in the longer run. The use of hydraulic presses is also advantageous to help reduce the harmful noise and vibrations caused due to hammering in traditional mechanical and screw presses making the process eco-friendlier.

However, probably the most important benefit of using hydraulic presses over mechanical or screw presses is the direction in which the force can be applied. Since hydraulic presses are not driven by gravity-based mechanisms, the force application direction is virtually limitless and depends on the degrees of freedom available in the machine. However, it is also essential to understand that in order to work against gravity, the force provided as a result of hydraulic pressure must be enough to not only forge the workpiece into shape but to also counter the weight of the hammer itself. Therefore, high-tonnage hydraulic presses still tend to be vertical. The workpiece in similarity to mechanical and screw presses is rotated such that the intended area to be forged now faces the hammer directly. 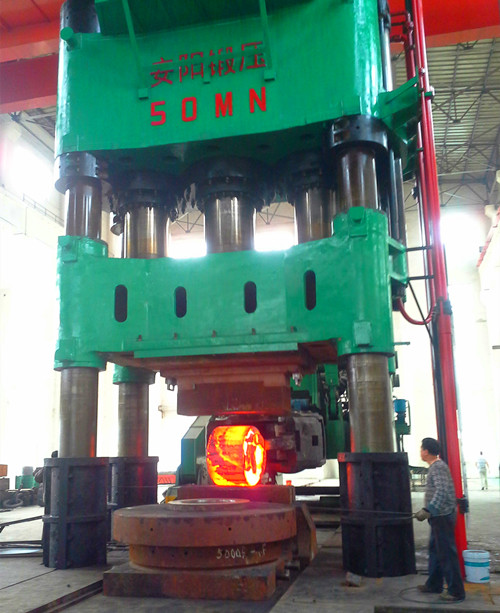 Open die forging dies are usually basic-shaped such as flat or circular, where the bulk material is rotated and hammered multiple times to form it into a more usable shape. The friction between the hammers and the workpiece prevents the material from squeezing uniformly in that the part in contact with the hammer remains the same while the bulk of the material in the middle expands. This effect is known as barrelling for which allowances are designed into the operation.

Closed die forging dies on the other hand have the impression of the final part which is either hammered in one or multiple sequential operations. Due to die closure, it is common to observe a portion of the material squeezing out from the middle where the dies meet which is referred to as flash. To prevent this from happening, the dies are differently designed, and the specific workpiece material is added in controlled volumes, otherwise, this is later removed during the post-processing of the formed part.

Forging tends to make the material stronger in that the inside grains get aligned with the final shape of the material during forming. This is especially important in high carbon steels whose parts are used in structural and load transferring applications.

Products of Anyang forging press include both open and closed die forging presses with a variation of hydraulic and CNC assisted presses. Our presses deliver precise control of energy and stable quality of forging in addition to repeatability for mass production. We provide forging presses that help attain high dimensional accuracy in parts.